Saturday, June 4, Weather, sunny and 30C – good thing as we all got thoroughly soaked.

Quite a few years ago I took Waldy on a kayak trip down the St. Mary River near where we live for his 55th birthday. We finally bought our own kayaks last week so we could join our friends Barry, Leona and George. Last Saturday we went down the Waterton River. We had quite the adventure!!

The river was pretty high and there was some ‘oh *#”*’ moments. George tipped over first but he got back upright without any issues. Waldy and Barry tipped and lost their kayaks. Leona was stopped on the side with her’s tipped over so I stopped to help her, then Leona saw Waldy’s kayak lodged up against a large rock right next to where we landed. Waldy came along and got it out but Barry’s was a gonso. Barry had tried to hang on to Waldy’s upside down kayak but that caused him to tip too. Waldy’s bag was in Barry’s kayak as he gave it to him when he tipped, so wallet, phone, etc also gonso. Due to their floating down the river until they could finally get to shore, both Waldy and Barry got a bit roughed up by the rocks.

We pulled in at the Waterton Colony and decided that was enough for the day as we’d been on the river already for 6 hours, and while we were waiting an RCMP fellow from Pincher Creek came along and told us someone turned in Barry’s kayak and all the bags  to the Cardston RCMP. He was having visions of looking for a body so was very relieved that  we were all okay and we were very relieved that there are still honest people in this world. (The fellows that found the kayak left a message on our home phone so I phoned and thanked him profusely. They were from Lethbridge and were ahead of us on the river.) Then when we were driving home we bumped a deer as he ran across the highway, but he was okay! What a day! We did have fun tho and intend to continue on with the next kayaking adventure. Next time Waldy will attach his gopro to himself so you can see his adventures, and no wallets or phones. (Some of the photos are from George, thanks.) 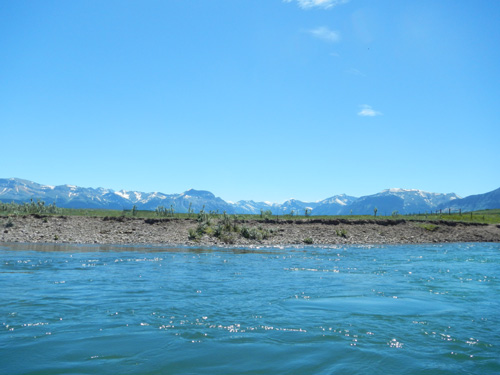 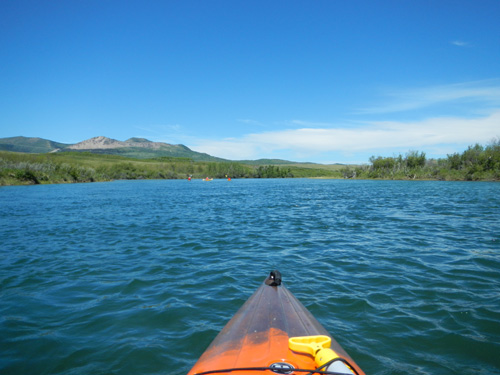 George taking a photo of some of us. 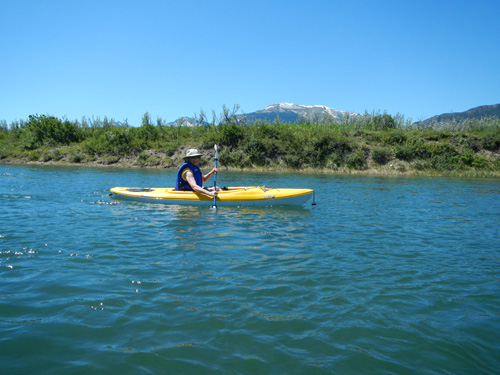 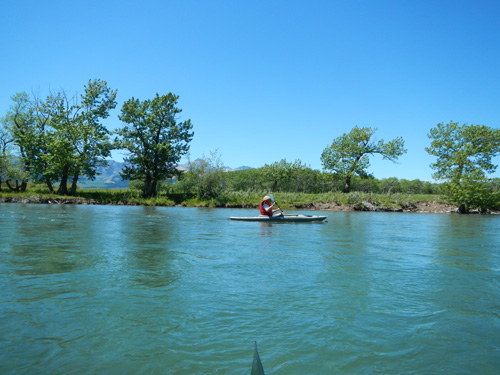 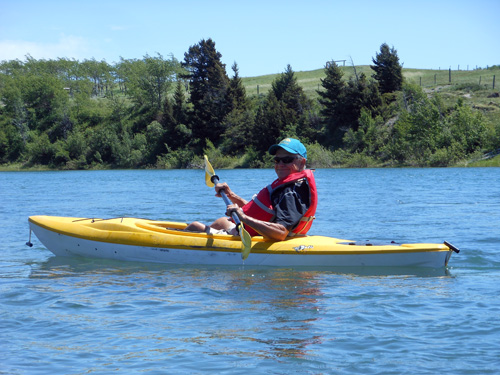 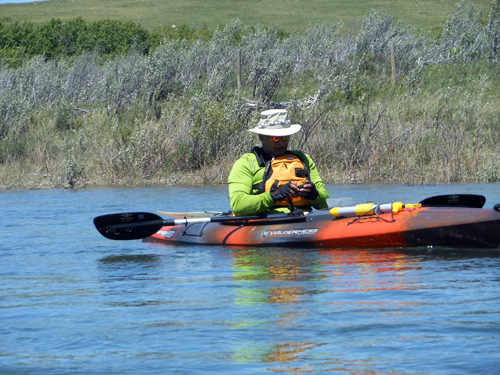 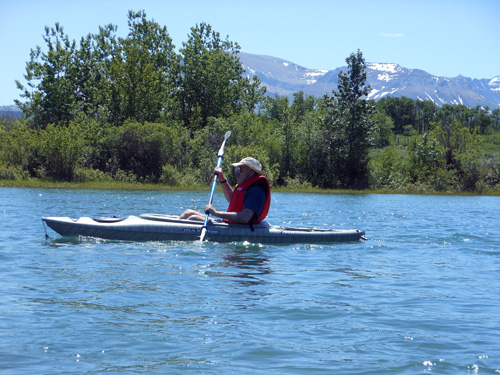 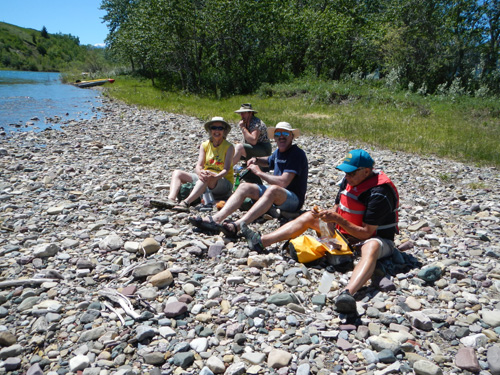 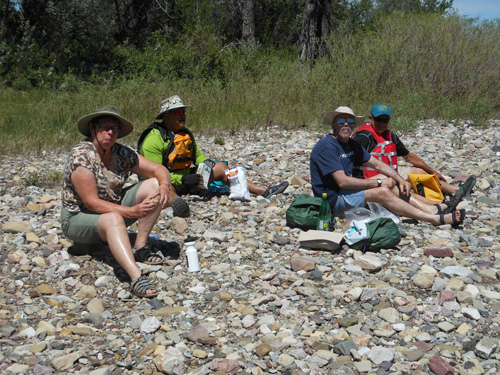 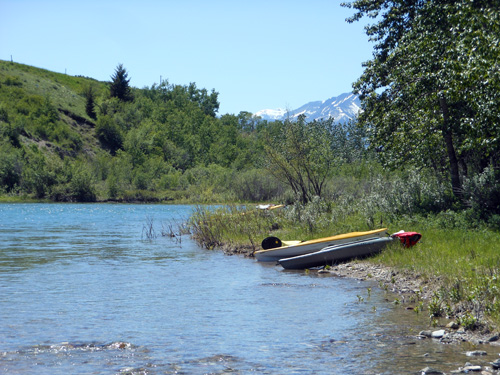 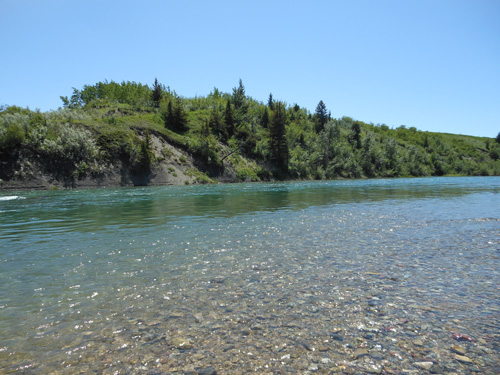 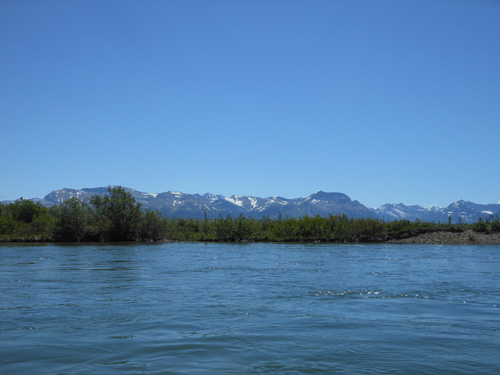 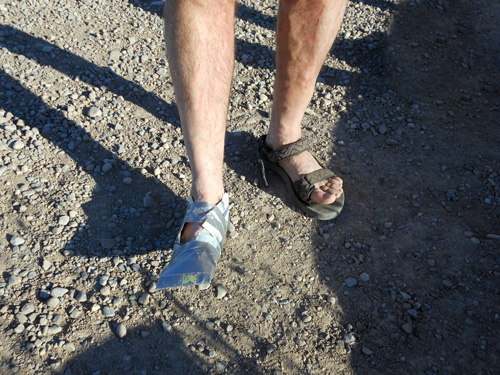 Waldy lost one of his shoes so George, who has everything, made him a new one! 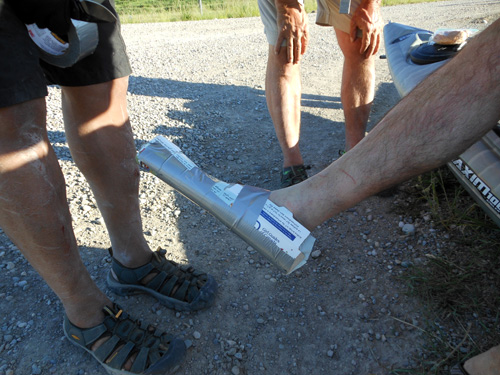